A Brief History of the Minerva Press

Our Gothic Classics series brings out new editions of rare fiction from the 1790s to the 1830s, the heyday of the Gothic novel. Many of these books are so scarce that they survive in only a handful of copies worldwide--sometimes only a single copy--and most of them are being reprinted here for the first time ever.

From our Minerva Press page: William Lane, a London printer and publisher, began publishing under his own name in the 1780s, but around 1790 his books began to carry the imprint of the “Minerva Press,” a somewhat ironic name, since Minerva was the Greek goddess of wisdom, and the Minerva Press was routinely decried by literary critics for the lowbrow literature it published. Although most publishers today have branded their presses (think Penguin, for example), creating the Minerva brand for his titles was a clever and innovative marketing move for its time, as was Lane’s formation of a circulating library, where he could lend out his books on subscription to those who couldn’t afford to pay for them outright.

Between 1790 and 1820, Minerva was by far the largest publisher of fiction, publishing mostly Gothic fiction, but also other types of novels, some nonfiction, and reissues of classic 18th century literature. The Minerva Press was taken over by Lane’s business partner, Anthony King Newman, who dropped the “Minerva” brand name in the 1820s. Minerva published some of the best of classic Gothic fiction, including most of the works of Francis Lathom, Regina Maria Roche, Eleanor Sleath, Isabella Kelly, and many others.

Valancourt Books is pleased to rediscover many of these rare works and restore them to print in quality new editions. 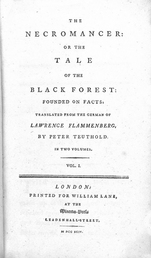