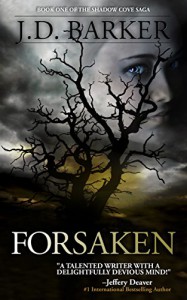 *There is a giveaway for a signed copy of this book up at Horror After Dark right now! *

This was a fast paced novel that I enjoyed! It's a story about a horror writer, (oh no, not another one you may be thinking), but this one is slightly different. A story comes to the protagonist, Thad,  almost completely whole; streaming through him like lightning, it comes out on paper. This story is more than just a fictional,  historical account of the witch trials in Salem, MA. It may not be fictional, for one thing, and it may not take place entirely in the past.

I liked how this tale was related, with chapters featuring the present alternating between chapters from The Journal of Clayton Stone. It took a little while to get into the flow of things, but not too long. That's because the pacing in this book was very fast and the chapters were short. Before I knew it I was speeding along and then I just had to finish it, (right? You know how it is.), because I was so close to the end.

All of the characters here were flawed, but for me that made them more real. There were a good bunch of creepy times going on in the house where Thad's daughter and his pregnant wife waited for him to return from the sale of his book. As this story went along those creepy times graduated up to scary as hell. Thad wasn't having the best time with his book agent either.

This is a story of witchcraft, the first in a series. I have sworn to myself that I wouldn't start another series until it was finished, but here I am. A friend of mine on Goodreads mentioned that he liked this book, I took a look, claimed it for review at HAD and here we are. I'm glad that I did choose it, because I found it to be well written, fast paced, scary and imaginative. I will be looking forward to the next in the series because it's been a long time since I read such a damn fine witch story. (As an added bonus, this novel is sandwiched between two nods to Needful Things. There may have been other nods to SK as well...Grady's? But that might just be my active imagination.)

A free copy of this book was provided in exchange for an honest review. This is it!

This and other reviews like it can be found at Horror After Dark.