The Winter Family by Clifford Jackman 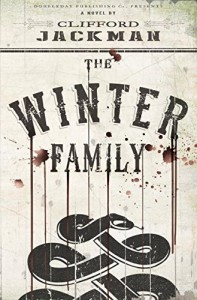 I veered away from my usual genres when I requested this book from Net Galley. Here is the setup:

Tracing a group of ruthless outlaws from its genesis during the American Civil War all the way to a final bloody stand in the Oklahoma territories, The Winter Family is a hyperkinetic Western noir that reads like a full-on assault to the senses.

Spanning the better part of three decades, The Winter Family traverses America's harsh, untamed terrain, both serving and opposing the fierce advance of civilization. Among its twisted specimens, the Winter Family includes the psychopathic killer Quentin Ross, the mean and moronic Empire brothers, the impassive ex-slave Fred Johnson, and the dangerous child prodigy Lukas Shakespeare But at the malevolent center of this ultraviolent storm is their cold, hardened leader, Augustus Winter—a man with an almost pathological resistance to the rules of society and a preternatural gift for butchery.
From their service as political thugs in a brutal Chicago election to their work as bounty hunters in the deserts of Arizona, there's a hypnotic logic to Winter's grim borderland morality that plays out, time and again, in ruthless carnage.
With its haunting, hard-edged style, The Winter Family is a feverishly paced meditation on human nature and the dark contradictions of progress.

This is mostly a western with a side of Chicago. In a steady push westward from the burning of Atlanta, this story spans the years from 1864 through 1900. Even the so-called civilized city of Chicago is only 1 step away from life in the brutal wild west. In fact, it might be even more brutal where its politics are concerned.

The head of the Winter family, which isn't a family by birth, is Augustus Winter. Golden eyed. Inscrutable. Cruel and seemingly without conscience, Augustus leads his band of mad men across the country. This group isn't pleasant, but they're well drawn and make for fascinating reading. With breakneck speed the reader is pulled along with this group, even at times when the reader is reluctant to go.

The history of our country is brutal and this book does not shy away from the many crimes against humanity that were perpetrated back then.  I like to think that America has grown and learned from her history, but sometimes I wonder. I also wonder what guise Augustus Winter would be employing, if he were alive today. Head of ISIS? Leader of the Taliban? He may be a fictional character, but what he stood for is alive and well, even today, and I find that to be sad.

This book is due to be published in April of 2015. I highly recommend it to those interested in the history of the United States, as well as to fans of horror and westerns.

*I received a free e-ARC of this book from Net Galley, in exchange for an honest review.*