The Facts in the Case of E.A. Poe is a brilliant hybrid biography/thriller by Andrew Sinclair. To research the author, Sinclair followed in the footsteps of Poe and kept a journal of his travels. Last year we acquired the author's journals and today, to celebrate Poe's birthday, I'm going to post some items from the journal. To start, here's a picture of Andrew Sinclair at Poe's grave in the mid-70s. Learn more about the book below. If you're interested in reading this fine book, the ebook is marked down to $2.99 today. The Facts in the Case of E.A. Poe (1979) by Andrew Sinclair, with a new introduction by the author 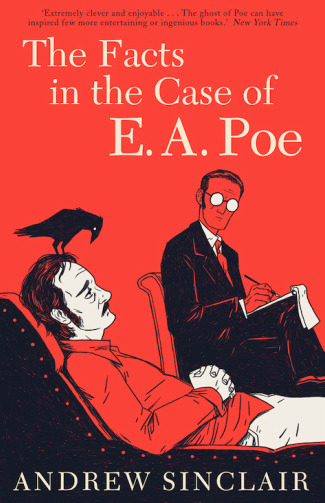 Ernest Albert Pons is a Holocaust survivor with an unusual coping mechanism: he lives in the delusion that he is, in fact, Edgar Allan Poe. His psychiatrist Dupin (chosen because he shares a name with Poe’s fictional detective) has a radical idea for treatment: Pons must see for himself that he is not Poe by retracing the poet’s steps and writing an analysis of his life. As Pons pursues Poe from his childhood and university years in Virginia to his adult life in New York, Philadelphia, and Baltimore, we gradually learn the secrets of both men’s pasts. But when Pons begins to suspect Dupin may be engineering an elaborate scheme to kill him, is it just another part of his delusion, or is Dupin plotting a macabre twist worthy of Poe?

A wholly unique book that manages to blend seamlessly a page-turning thriller with an important work of Poe criticism and biography, The Facts in the Case of E. A. Poe (1979) was widely acclaimed on its initial publication and returns to print in this new edition, which includes a new introduction by Andrew Sinclair. Sinclair's The Raker (1964) is also available from Valancourt.