“A great read—evocative of another era, engrossing from the first page, chilling.” – Publishers Weekly

“McDowell must now be regarded as the finest writer of paperback originals in America.” – Stephen King

“Michael McDowell has a flair for the gruesome . . . the nurturing of utmost horror.” – Washington Post

“You need a strong stomach . . . filled with gore and horror. At the same time, he writes so well that you can’t stop reading his books.” – Ocala Star-Banner 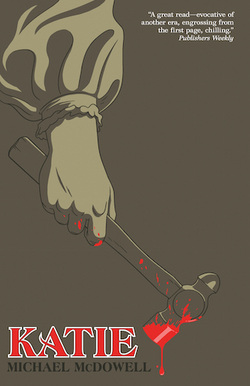 When Philo Drax receives a letter from her wealthy grandfather saying he fears for his life at the hands of the vicious Slape family, she rushes to the rescue. But too late! Katie Slape, a monstrous girl with psychic powers and a penchant for smashing skulls with her hammer, has already finished him off and gotten hold of his cash.

Determined to track down the murderers, Philo hunts Katie and her family through the streets of 1860s New York, where the Slapes’ coffers are filling up with money as their cellar fills up with corpses. But going after the Slapes might be the worst decision of Philo’s life, for no one escapes the bashing of Katie’s hammer!

A bloody, action-packed romp, Katie (1982) is a throwback to the exciting and violent “penny dreadfuls” of the Victorian era and features the same brilliant writing as Michael McDowell’s classic horror novels The Elementals and Blackwater.

Out on March 10th