It's A Long Story: My Life by Willie Nelson and David Ritz, narrated by Christopher R. Grant 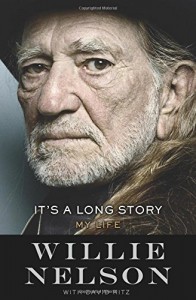 I enjoyed this narration of Willie Nelson's autobiography! I'm not a fan of most country music, but I find Willie to be an interesting man full of contradictions, so this audio book appealed to me.

I learned a lot about Willie and his life, much of which I did not know. For instance, Willie is a very spiritual man. (Despite this spirituality, he has had a difficult time being a faithful husband. There's one of those contradictions I mentioned above.) He loves and practices martial arts. He wrote the song "Crazy", that most people associate with Patsy Cline.

I also learned more about the things that I already knew: Willie loves his weed. Both of his parents died of lung cancer, and despite Willie's smoking weed all the time, he's still going strong in his 80's.  Willie supports the family farmer and he supports them not only with his money, but with his time. He also loves this earth and supports lots of endeavors to save and preserve her. Willie is a true and loyal friend, who did not dish the dirt on his fellow performers as much as he could have. He would just say things like "Waylon loved his cocaine", and leave it at that.

I learned a lot, I enjoyed listening and what more could I ask from an audio book? The narration was excellent and I enjoyed the life that Mr. Ryan brought to Willie's stories.

If you like Willie, or even if you would only like to learn more about him, I highly recommend this audiobook!