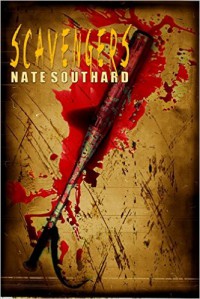 This was a decent zombie survival story.

The entire novel consisted of a group of survivors making a risky food and supply run. Five survivors against an estimated 3,000 zombies seems like a no win situation, but they have no choice as their food is running out and their crops are failing. A lottery is held to determine who the five scouts are going to be.

A back and forth format between the past and the future is utilized, giving the backstory to each of the scouts. Problem being, I didn't care much for any of them. Oddly enough, the one guy I did like was the biggest jerk of them all!

The zombies here were fun, though, that's for sure. No explanation was given as to how they got to be that way, and that was just fine with me. I think most zombie stories fall apart when they try to explain the unexplainable. These zombies were fast, they were hungry and there were lots and lots of them, and that worked in this story.

Overall, this was not a bad addition to the zombie genre. However, in light of shows like The Walking Dead where the characters OWN the story, (NOT the zombies), I felt this novel needed a bit more in the character building department. I did enjoy the writing and the world building and for that, I probably will give Nate Southard's work another look in the future.

*I was provided a free e-copy of this book by Sinister Grin Press in exchange for an honest review. This is it.*