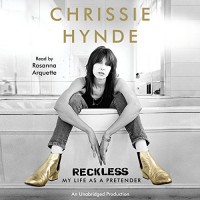 Reckless is a great title for this book AND for Chrissie Hynde.

This woman has been through some serious shit. Most of it self inflicted and just plain crazy. STDs, drugs and Rock & Roll-she's been through it all.

The book ends after two of The Pretenders died, (a long time ago), and I think that's apt because that's when her recklessness ended, (mostly), too.

Growing up in the sixties allowed her to do a lot of things that could not be done now. You can't knock on the windows of cars and ask someone to take you somewhere, not without worrying you'll end up in a dumpster behind a 711, anyway. You can't hang out with hard bikers without putting yourself in danger. (That one was as true then as it is now, and believe me, THAT was some real danger.)

Overall, I'm glad I listened to Chrissie's story. It's a story of using caution and NOT being reckless.  Not if you want to continue to live. I liked that she remained herself throughout and took responsibility for her actions. This story is not pretty and it's not for everyone, but I enjoyed listening to Rosanna Arquette narrate this crazy lady's reckless life.