We're celebrating Jane Austen's birthday today with this new release: A GOSSIP'S STORY (1796) by Jane West, who was far more widely read than "the other Jane", Austen, whose SENSE AND SENSIBILITY (1811) most critics believe was inspired by West's book. This first-ever modern edition is fully annotated and includes a new scholarly introduction by Prof. Devoney Looser. Those interested in 18th-century literature, Jane Austen, or neglected women writers won't want to miss this edition, which was almost a decade in the making! 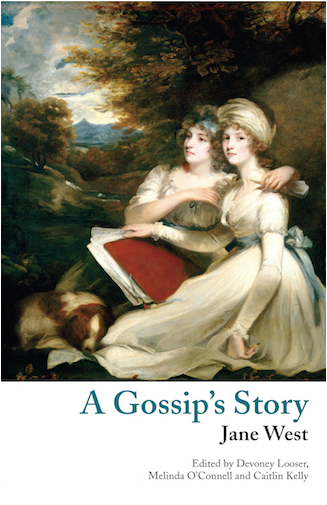 One of the most popular and prolific authors of her time, Jane West (1758-1852) enjoyed her greatest success with A Gossip's Story, and A Legendary Tale (1796), one of the best-selling novels of its era. Yet in addition to its significance as a lost classic by a neglected woman writer, A Gossip's Story has long been recognized by scholars as a likely influence on Jane Austen's celebrated novel Sense and Sensibility (1811).

West's wryly humorous cautionary tale - with its themes of courtship and love, money and romance, filial piety and financial ruin - centers on two very different sisters. Where Louisa proves herself to be rational and full of good sense, Marianne is driven by her emotions and romantic idealism, and their dispositions lead them to starkly different fates.

Available worldwide in paperback and ebook: