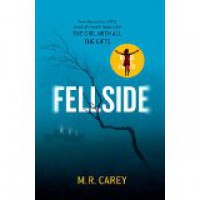 Fellside is not really a horror story, in my opinion. It's more of a ghost story with horrific elements. Whatever the genre in which it's classified, it's a damn fine book!

Jess is a heroin addict who was badly burned in a fire; a fire in which a young boy was killed. This story begins when Jess wakes up in the hospital and discovers what happened. She is held responsible for the death of the boy, and ends up in prison. I can't tell you anything else about the plot because I believe the reader needs to let it unfold as the author intended.

I thought the beginning of this book was excellent, but then the pacing slowed until about the halfway point. As the plot thickened though, the pacing picked back up again and took off in directions that I doubt anyone could see coming. Much as what made The Girl With All the Gifts a special story, Fellside is also special-it's about the telling of the tale as much as it is the tale itself.

The characters here were not all black and white, and I enjoyed that. They almost all had many layers and nothing much was totally clear about any them until near the very end. Being that the majority of this book took place in a women's prison, I expected the main players to be bad people, and don't get me wrong, some of them were. But the majority of them came across to me as REAL people, not just cardboard cutouts that moved the plot along. And the people that I expected to be the "good" characters had a lot of surprises in store. I bet they surprise you too.

This novel was a mystery to me almost the entire time I was reading. I couldn't guess, (though I tried!), where the story was going to go, what was going to happen or how it would all end up for Jess. I find this to be a rare occurrence, and as such, I relished the journey that was Fellside.

Highly recommended to fans of the author's previous work as well as to fans of ghost stories!

You can purchase your copy here: Fellside

*Thank you to the publisher and to Net Galley for providing the free e-ARC of this novel in exchange for my honest review! This is it. *