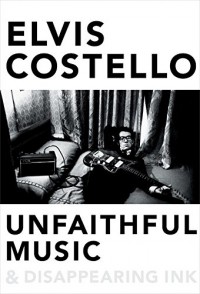 Unfaithful Music is just short of 700 pages long. Whew! I originally checked out the audio book from my library back in December 2015, but the loan period of only 2 weeks proved insufficient to listen to the entire book. So, I got back in line for it and it finally came back in a couple of weeks ago.

I learned a LOT from this autobiography, which is my main reason for reading or listening to them in the first place. Some, like the Patti Smith one I listened to a few months back, M Train, only allow a small peek into the day to day life of the subject. I don't like that-I want to know more.

With Elvis, I learned about what happened with that racial slur incident that everyone's heard about. I'm not sure I accept his explanation, but I learned about it. I learned that I'm not familiar with even 10% of Elvis' career. I had no idea of the range of the artists with which he's worked, either writing songs for them, collaborating on songs with them, or performing with them. His relationship with artists like Allan Touissaint runs so deep-I had no idea. His love of the Blues, (a personal love of mine), and all types of music, really, was never as evident to me as it is now. I can sum it up this way I guess, I now have a huge list of music that I want to listen to-not only Elvis', but other artists too, like the aforementioned Allan Touissaint. I also need to see his show that was on the Sundance Channel I guess, (where was I when this was on?), called Spectacle.

The one thing I knew for sure about Declan McManus, which this book only confirmed, was that the man can write. Not only songs, but this book too. His narration only served to emphasize the power of his writing. When speaking about the death of his father, I was brought to tears. Maybe it's because my father's death was eerily similar, but I think it's more because of the feeling that comes through in both Elvis' writing and in his voice. Both of which help to explain why the man's career has been so long lasting.

I highly recommend this book to anyone looking to learn more about Elvis' life, career and music. Yes, I do feel that it runs a bit too long, but I enjoyed it just the same. I think you will too, if you're looking to satisfy your curiosity about the man. (If Your Aim is True, so to speak. )