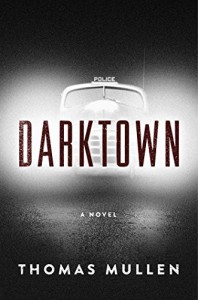 Despite wearing the same uniforms as the white police force, the first black police officers in Atlanta, GA shared none of the other benefits afforded to white officers at the time. Forced to work out of the basement of the YMCA, provided with no patrol cars, not allowed to investigate anything and not even allowed to step foot in the white police station, one has to wonder why Atlanta made them police officers at all.

Darktown delved into that mystery and many more. Boggs and Smith, both black officers, one freshly back from WWII and the other the son of a preacher, commanded absolutely no respect from anyone. Not from other officers and not even from the black community, which they were tasked with protecting. It seems that the entire world resented them for one reason or another.

One night, a vehicle took down a light pole right in front of them. Upon discovering the white driver was drunk, and had a bruised young, black woman in the car, Boggs and Smith called the white police. (Since they were not allowed to arrest the man themselves, they had no other choice.) But while waiting for the white cops to arrive, the man just drove off, and there was nothing the black officers could do about it. A few days later, the young black woman turns up dead and the black officers just can't let that go.

Leaving off the plot so as not to spoil anything, I'll focus now on how this book made me feel. I'm aware of the shameful behavior that went on in my country, but this book went into specifics, and they were very difficult to read. The treatment of blacks in that area, during that time period, (1948), was deplorable. There's no other word for it. Every single aspect of their life was controlled by whites. They couldn't look a white person in the eye. They couldn't defend themselves, verbally or physically, when wrongfully accused of something. They had to ride in the back of the bus-often while the white people in the front openly disparaged them. Some of the incidents recounted here turned my stomach.

Thomas Mullen took an unflinching look at the relationship between blacks and whites. As difficult as it was to read, I imagine it must have been even more difficult to write. To avoid making the same mistakes in the future, we have to be familiar with the mistakes we've made in the past, and this book shoves those mistakes right under our noses. Do you have the strength and stamina to look them right in the face? If you do, I highly recommend Darktown.

*Thank you to NetGalley and Atria for the free advance copy of this book.*