The Children of the Abbey (1796) by Regina Maria Roche

Irish author Regina Maria Roche's THE CHILDREN OF THE ABBEY (1796) was not only one of the best-selling novels of its time but also one of the most popular novels of the 19th century, running through 80 or so editions. A classic Gothic novel and an influence on Jane Austen, it has inexplicably remained out of print for the last 100 years but returns now in a new scholarly edition with an introduction and notes by Prof. William D. Brewer. 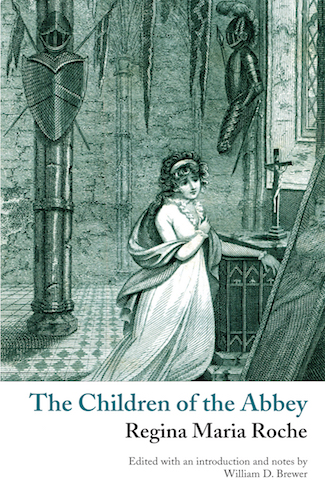 Running through at least eighty editions in the 18th and 19th centuries, Regina Maria Roche's The Children of the Abbey (1796) was one of the biggest successes of its time, rivalling and perhaps even outselling Ann Radcliffe's seminal Gothic The Mysteries of Udolpho (1794).

The heroine of Roche's novel, Amanda Fitzalan, and her brother Oscar, are unfortunate siblings defrauded of their rightful inheritance, Dunreath Abbey, by a will forged by a wicked relative. Beset on all sides by danger, including the schemes of the haughty Marquis and Marchioness of Rosline and the sinister intentions of the villainous libertine Belgrave, can Amanda reclaim what is rightfully hers and win the love of the dashing Lord Mortimer?
​
With a sprawling cast of characters and an intricate plot that moves from Wales to Ireland to England to Scotland, Roche's classic novel is reprinted here for the first time in over a century. This new edition includes the unabridged text of the four-volume 1797 second edition and an introduction and notes by Prof. William D. Brewer, who discusses its influence on Jane Austen and calls for reconsideration of Roche as an important early Irish novelist.

Available worldwide in paperback and ebook