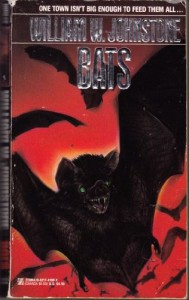 Bats is a re-release:it originally flew free back in the 90's and that's one of my favorite periods for the horror genre, so I requested it from Net Galley right away. I'm sad to report that I didn't enjoy it as much as I had hoped.

You can probably guess from the title that this is a creature feature, so you know going in that's it's most likely not going to be a literary classic. (Which was fine with me, sometimes that's exactly what I want.) However, I do expect the writing to be of a certain quality, and I'm not talking Cormac McCarthy level here, but I wouldn't think that a James Herbert level would be unrealistic. Unfortunately, I don't think the Herbert level was reached here.

That aside, the story itself was a lot of fun. Most especially because these weren't just normal bats, they were mutants. Incredibly large with huge fangs, they were also capable of immense intelligence. That's all I can say, because this is where all the fun of the book is and you should read it for yourself. One thing that bothered me in the narrative itself, was the repetitiveness of "stupid people deserve what they get" mantra. Alright, we get it, they're too stupid too live. Move on.

Overall, Bats did deliver on the FUN its cover promised, but the writing itself and repetitive nature of a few viewpoints soured me on the book as a whole.

*Thanks to Kensington/Lyrical Underground and Net Galley for the free e-ARC in exchange for my honest review! This is it.*