The Apartment by S.L. Grey 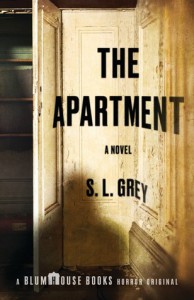 Most of my problems with this book originated with this statement in the book's synopsis:

"The Apartment is a terrifying and tour-de-force of horror, of psychological thrills, and of haunting suspense."

I'm sorry to report that for me, it was NOT any of these things.

A South African couple survives a home invasion/robbery physically unscathed but emotionally beaten and drained. At the suggestion of a friend, they decided to do an apartment swap with another couple from Paris. They have basically no money since the robbery and this is a good way for them to get out of their house on the cheap. Instead of being the romantic vacation they had hoped for, they arrive in Paris to find a nearly abandoned building and a disgusting, filthy apartment.

My issues start right here at the beginning of the story. After having their home invaded and robbed by strangers, why oh why would they want to turn it over to another set of strangers? That made no sense to me. (There are a few other things that bothered me about this as well, for example, the couple buying the swappers fancy sheets and whatnot before they leave, when they have NO money!)

Up to this point, I was engaged with the story and I figured the good stuff, (you know, the aforementioned tour-de-force of horror), would happen once they got settled into the Paris apartment, but no. Paris turns into a nightmare for them financially due to credit card problems, and they have an ugly run-in with the only other resident of the building, Mireille. There are also a few unsettling incidents in the apartment, but again, nothing really horrific.

When they returned home early from their trip, I couldn't figure out where the story was going, but once it finally got there, I WAS satisfied. I liked how the story was related- with alternating chapters between Mark and Stephanie, and I admit to enjoying the denouement very much. However, it took way too long in getting there and again, (I know I'm harping), it was not a tour-de-force of anything, except maybe for boring.

Without that tagline raising my expectations, I might have enjoyed this novel more, but I was expecting to be WOWED and it never happened. By the time things DID happen I was so bored their impact was severely diminished.

Of course, all of this is just my opinion, your mileage may vary.

*Thanks to Edelweiss, Blumhouse Books and the author for the free ARC of this book in exchange for my honest review. This is it.*