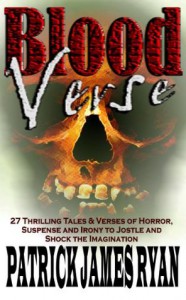 Blood Verse is a rather lengthy collection of short stories and dark poetry. The stories range all over the place from weirdly creepy tales to ones about psychos surviving the storm of the century. Some were bigger hits with me than others and those were:

Hair This was a story straight out of the Twilight Zone. Creepy and weird without any real explanations, this was my second favorite tale in this collection.

Spelling Bee reminded me a lot of Stephen King's The Running Man. I remember a game show in that story where people with heart problems had to run on a treadmill. In this story, contestants have to do the whole spelling bee drill-say the word, spell the word, then say the word again. However, in this game if you get the word wrong, the consequences can be deadly. (This was my favorite story.)

Little Swimmers was an imaginative little story that packed a surprise ending that really was a surprise. (That happens so rarely, at least for me.)

F-21 was all over the place from abusive husband, to spree killer to apocalypse survivor-there was just no way to predict where this story was going.

While all these tales showed a lot of imagination and promise, the writing itself left a little to be desired. Admittedly, I have pretty high standards as far as grammar and use of language are concerned, so this is mostly a personal observation on my part. Also, there were a few things that could have been caught with more careful editing; for instance the word Tornado's in F-21 shouldn't have been a capital T and it shouldn't have had an apostrophe either. Issues like this popped up more often than they should which is why I deducted 1.5 stars from a 5 star rating.

Overall, I enjoyed this collection of dark fiction and poetry and I believe that Patrick James Ryan is an author to watch. As such, I plan to read his novel The Night It Got Out later this month.

You can purchase your copy here: Blood Verse

*I received a free e-copy of Blood Verse in exchange for my honest review. This is it!*