People of the Sun by Jason Parent 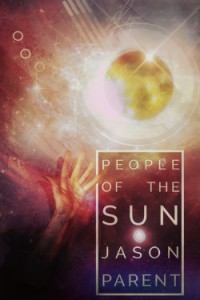 People of the Sun is a science fiction tale with heart!

Have you ever wondered how the world would react if we ever made "first contact" (to borrow from Star Trek, that's right, I'm a Trekkie), with an alien race? As Dave Matthews asks in his song Time Bomb, "If Martians fell from the sky, what would that do to God? Would we put the weapons down, or aim them up at the sky?" This book has its own way of answering that question.

When we imagine aliens, we might think of little green men, or ET or perhaps "gray men." However we might think of them, we do seem to think of them as all alike. This book addresses the likely fact that they are NOT all the same, that each of them has a personality just as we do. What happens if some of them are good and some are not? Everything becomes that much more complicated, doesn't it?

I'm not going further into the plot because the synopsis and several other reviews already do that. I will say that this book made me think of our likely response,(as a nation), and what I came up with was not pretty. It gets exponentially worse when I think of our response as a WORLD, with all of our different governments, with great and petty leaders alike.

I think Mr. Parent's take on all this was realistic and it caused me to think about all of these issues and more. Even though this was mainly a science-fiction novel, it had elements of horror. It was also well written. A good story entertains, has complex characters and it makes you think. People of the Sun has all that and as such I recommend it!

*Thanks to the author for a free copy of this book in exchange for my honest review. This is it. Further, I consider this author to be a friend, but this did not affect the content of my review.*