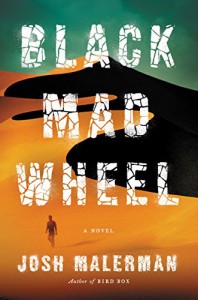 Black Mad Wheel is a story which defies categorization and instead focuses on delivering characters that you like and can believe in.

The Danes are a band consisting of ex-army men, (even if they were only in the army band), who are asked by the military to investigate a noise in the African desert. I know it sounds crazy, and maybe it is, but I found it be compelling dark fiction.

From Philip's point of view, (Philip being the band's keyboard player), the narrative switches between the trip to Africa and the present, in which he is hospitalized with every. single. bone. in his body broken. He wakes up not quite remembering everything that happened to him or what happened to the rest of the band. The very fact that he wakes up at all is a miracle. Or is it?

Featuring some of the creepiest scenes I've read in quite some time, the author's talent for dark fiction really shines through. I doubt that I'll ever look at a goat in the same way again and I'll probably freak out if I ever see a red piano in real life. I loved the writing and the descriptive scenes and I even loved reading about the two prior military teams that were sent to investigate this mystery sound. (Not to mention the story of the couple native to that part of the desert-it was truly disturbing.) The only difficulty I had was that the premise wasn't really believable-at least not to me. However, I suspended my disbelief, and once I did, I just went along for the ride and what a ride it was!

If you've ever felt a song in your heart, I believe you'll be able to identify with Philip and Ellen, his nurse, because it's the music they discover is a common bond between them. The ties between band members are also incredibly strong, (especially when they've been together as long as The Danes), and those connections are not easily broken. (In this respect, Black Mad Wheel reminds me of Robert McCammon's THE FIVE, easily one of the best fictional books about a band that I've ever read.) The last scene nearly broke my heart and I can't think of a more perfect ending.

Music, mystery, desert mines and mad doctors, (oh, didn't I mention that before?): with all that going on how can you resist reading this book? You know you want to! Go ahead: invest yourself in Black Mad Wheel , at the very least you'll be intrigued. At the very best, you will end up making space on your bookshelf at home-the one that houses all your favorite books. Highly recommended!

*Thank to Ecco books and to Edeweiss for the e-ARC of this novel in exchange for my honest review. This is it. *