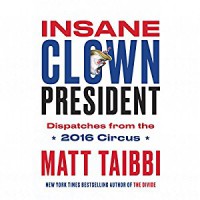 The only thing I really miss about my Rolling Stone subscription is the reporting of Matt Taibbi. And maybe the scary-ass environmental articles written by Bill McKibben. (I canceled my 25 year standing order because they had the audacity, {stupidity?}, to put the Boston bomber POS on the cover. I'm surprised this Massachusetts girl received her copy intact and not covered in spittle.) When I saw the audio of this book was available at my library, I eagerly put it on hold, but I'm sorry to say I'm a bit disappointed.

What I liked about this book was Taibbi's bluntness about the state of our media and the role that it plays in elections. I also liked his exploration of how that role has changed over the years-especially in regards to the 24 hour news cycle that now dominates our airwaves. I also liked the fact that he was hard on Hillary and her campaign. I'm not a Trump fan but I'm not a Hillary fan either. Taibbi went into some depth about how our candidates are selected in this country and it's not by us-America's citizens. It's by money. It's by the press. It's by those powerful people behind the scenes and their machinations. It's disgusting.

Regarding the media...all these talking heads and pundits and opinions. What happened to the freaking NEWS? What happened to the facts? I hate to say that Trump is right about anything, but the media is no longer trustworthy, if it ever was. They are out to sell us what they consider news. And guess what? Poverty doesn't sell. No one wants to see homeless people while they're eating dinner. People might turn the channel! No one could go without covering Trump's antics during the campaign, or even now, because people love that stuff! Here we are 6 months into Trump's administration and what has he accomplished? We're all too interested in Russia and Trump's Twitter feed to look too closely. Every time he Tweets the public is distracted. Again.

What I didn't like about this book, at least at times, was its flippancy. The campaign drinking games portion could have been funny-if it was done just once. Doing it twice, with lists of rules a mile long was redundant and irritating. The portion about who would play these candidates in a movie was also boring. I love Matt Taibbi's sense of humor and razor sharp wit, but I think these chapters were cheap shots and beneath his abilities and intellect. Then again, the title of the book is Insane Clown President and some of these things ARE insane.

Overall, I enjoyed this book and I still love Taibbi. I wouldn't recommend it to Hillary lovers though, unless they are ready to hear some hard truths. I expect that many are not.