The Daily Show: An Oral History 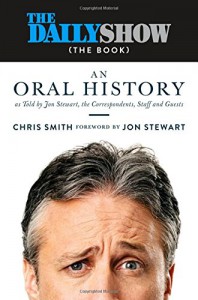 This book was a lot of fun! It seems like everyone that was ever part of the show as far as on-air personalities or behind the scenes people were interviewed here. However, many of the guests-friendly to the show or not, were also interviewed, which made the book all the more interesting.

I enjoyed hearing what John McCain felt when interviewed, (at times friendly interviews, at others-not so much). Anthony Weiner, Hillary Clinton and many others were also interviewed-all very absorbing.

This book didn't present only one side, but it did mostly slant towards loving Jon Stewart, and since I already did that, now I love and respect him even more. I'm not sure if the book started out to deify Jon, or if it was just because he's actually a good man- so what everyone had to say about him was mostly positive.

What I disliked about this audio book is that actors do all the voices. First, that was hard to get used to. Second, since all of these former employees, guests, and comedians were interviewed for this book already, wasn't there a way to get their permissions to use their actual voices instead of actors?

The Daily Show: An Oral History was hilarious and I learned a lot. I would recommend it to anyone interested in learning more about the show.

*Thanks to my awesome local library for the audiobook loan.*