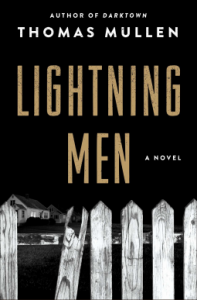 Atlanta in 1950 was a crowded place. The war was over and housing was scarce. Racial tensions were brewing, neighborhood lines were being redrawn,  and not everyone was happy about that. Even the fact that black policemen now served in the Negro areas of Atlanta didn't mean these officers had the respect of white officers nor that of the residents. When a white man gets beaten down by the Klan and then a Negro beaten down a few days later, tensions threaten to erupt. What happens next? You'll have to read Lightning Men to find out!

I was excited when I discovered there was a sequel to last year's Darktown. I was surprised at what I learned from that novel and I learned a lot from this one as well. For instance, I'd never heard of the Columbians before. Apparently, this group of neo-Nazis formed, (and so soon after the war in what must have felt like a direct insult to the soldiers and survivors now living in Atlanta), to unite their hatred of both Jews and Negroes. They even dressed similarly to the SS officers in Germany, hence their nickname: lightning men.

I also learned a lot about how the neighborhoods changed during that less than peaceful time in American history. It's often painful to read about, but it's interesting to see events from several different points of view. Rake, Boggs, Smith and MacInnis are well rounded characters and even now, after a second novel, I think they all still have some secrets in reserve. None of them are perfect and they are all struggling to find their place in this new world, their new police station, (even if it is in the basement of the YMCA), and in their new neighborhoods. Social change doesn't come easy and I think all of these characters recognize and respect that in their behavior, which made them believable to me and maybe a little lovable too.

Lightning Men is scary in a way, because it's easy to recognize some of the behaviors from this story on the nightly news today. It's also sad that so much good can begin to be undone by just a few hateful people in high places. Not only is this story a good one, but it reminded me that America always has to remain vigilant,  so that everything we have worked so hard for as a people, is not undone by only a powerful few.

Highly recommended! You can get your copy here: Lightning Men

*Thank you to NetGalley & Atria for the e-ARC in exchange for my honest review. This is it.*