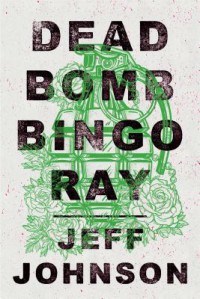 Mark my words readers, Jeff Johnson is an author to watch! I haven't yet read anything from him that I haven't enjoyed, and as such he's one of my go-to authors.

In DEADBOMB BINGO RAY, we have a tall, handsome "fixer" who earned his nickname during an unfortunate incident at a casino. He earned his reputation the hard way and everyone knows who he is and stays clear.

That is, until he finds himself on the radar of one Tim Cantwell, a man he's already taken down once. Unfortunately, Cantwell did not learn his lesson the first time around and now he's looking for revenge. Throw in the beautiful Mary Chapman, a black man named Skuggy, DBR's secretary Agnes, her son Cody, and the new love of his life, Abigail, and you have a memorable cast of characters. Will Cantwell be successful in his bid for revenge? You'll have to read this to find out!

I need to get one thing straight with you-DEADBOMB BINGO RAY is NOT a hero. He is not a good guy. What he is is a thinker-capable of masterminding schemes and plans that make Lex Luthor look like a drooling idiot recently escaped from the asylum. Oh, and he sometimes kills people.

What makes this story so entertaining is the characters. Even though DBR isn't a good guy, you cannot help but admire the style with which he goes about his nefarious deeds. His home sounds beautiful, he rescued a Pomeranian, and, (like most of Johnson's main characters), he cooks. His secretary Agnes hates Woody Allen so much,(because of the situation with his step-daughter), she tells everyone she meets that she's going to kill him. She also loves dogs. Ray's friend and sometime assistant, Skuggy, is an hilarious mystery of a man with long fingernails and colorful language, who likes Newports. All of these characters are so vividly drawn and real, they seem to come to life with little to no effort on the part of Johnson. He makes it look easy.

There is plenty of material here that will offend people; as previously stated DBR is not a good guy. People die. Some animals die. That's part of the gritty reality of this neo-noir world and that's who these people are. At least when they are committing crimes, they do it stylishly.

One more thing I want to mention is the inclusion of song titles/bands throughout the novel, many of which I weren't familiar with. I did not listen to all of them, but when I had the opportunity and the means to do so, I did. I felt like these songs helped to set the mood of what was coming next and I also thought it helped to achieve an almost movie-like experience while reading.

These are all the reasons I said at the start that Jeff Johnson is an author to watch. Every book I've read from him so far is totally different from the rest, but they all have one thing in common and that is STYLE. I like it and hopefully you will too!

You can get a copy here: Deadbomb Bingo Ray

*I received an e-ARC of this book via Edelweiss and Turner Publications in exchange for my honest review. This is it. *