A Walk in the Woods by Bill Bryson, narrated by Rob McQuay 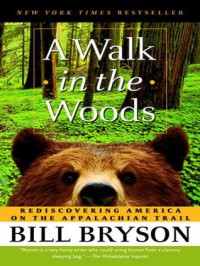 A WALK IN THE WOODS was okay.

The author and his friend did not get to hike the entire trail as they had originally intended, which was not only disappointing for them but for me as well.

I learned about the history of the trail and how the whole thing works. I previously had no idea that the trail sometimes crosses roads and rivers and whatnot-I had this picture of a pristine wilderness in my head and while some parts are just that, others are not at all.

I thought there would be a bit more humor than there actually was and on top of that, there were no actual bears, (see that one on the cover there?), unless you count the night something was heard just outside of their tent.

Overall this was fun and I learned some things, so 3 stars it is.

Thanks to my local library for the loan of this audiobook. Libraries RULE!