The Book of the Unnamed Midwife by Meg Elison, narrated by Angela Dawe 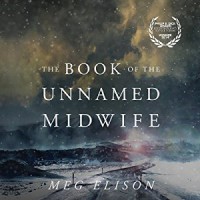 Just like in the novel REBECCA, we never learn the main character's name in this book. Hence the title!

I discovered Meg Elison through a few short stories she's written for horror anthologies and magazines and I decided that I wanted to try one of her novels. This one was recently on sale and to add the audio to the Kindle version didn't break the bank, and here we are.

THE BOOK of the UNNAMED MIDWIFE was a bleak post-apocalyptic tale wherein a disease wipes out nearly every woman on the planet. The scarcity of women soon becomes a problem for those that did survive. Will they also be able to survive the wandering groups of men, many of whom haven't seen a woman in over a year? You'll have to read this to find out.

I loved the main character in this novel. Yeah, she swore a lot, was bisexual and independent. (These are a few aspects other reviews have pointed out as being negative; I actually enjoyed them.) I liked how her previous work as a nurse and midwife helped her to try to save other women she came across in her travels. I also respected her intelligence-dressing as a man to disguise her gender and doing whatever else needed to be done.

I enjoyed the way the story was presented with one exception. This tale was introduced as being the main character's diary, and a woman is having some young boys transcribe it decades later. As such, this is mostly a first person narrative; except that in a few spots the tale slipped into a third person narrative and that did not quite make sense to me, as there was no way our heroine could know these things. (Though I was happy to learn the facts related during those portions, to be sure.) That is the only gripe I had with the book.

Post apocalyptic fiction doesn't capture my attention as much as it once did, but this book rose above the normal PA tale. I was engrossed and invested and I wanted our unnamed hero to win, though "winning" was hard to classify-other than just surviving.

I should also mention that the narrator was most excellent and managed to believably deliver a number of different characters and accents. Kudos to Angela Dawe!

To wrap up here, I highly recommend this book and/or the audiobook if that's your thing, most especially to fans of post apocalyptic fiction and strong female characters!

*I bought this book & the audiobook with my hard earned money and this is my honest opinion.*