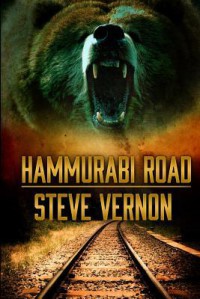 HAMMURABI ROAD is one messed up, creative, and funny as hell novella! Listening to the audio made me burst out laughing several times, (which is generally frowned upon at work.) What made it even worse was that I couldn't explain why I was laughing so hard, because these people? They wouldn't get why the bear scene was so funny.

As is stated in the summary, this is the tale of 4 men on the road, three in the front and one tied up in the back. We're talking Canadian backwoods men and they're looking for revenge. What they get instead is a bear, a possibility of mistaken identity, and some flashbacks of "Shut the F up, Donnie," from the Big Lebowski.

I listened to this on audio, narrated by Robert Thaler, who is new to me. His voice took a bit of getting used to, but once I did, I let him tell me the story of these rednecks and their revenge and I lost myself for a while.

Over the top and not afraid of offending anyone, HAMMURABI ROAD is an hilarious way to spend a few hours! Recommended!

You can get a copy here: HAMMURABI ROAD

*I received this audio free from the author in exchange for my honest feedback. This is it.*