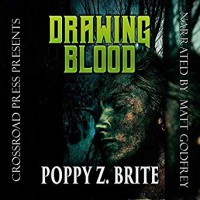 A good old haunted house story is something I've always loved, so when the narrator of this tale offered me a chance to listen to the audio in exchange for a review, I jumped at it. Poppy Z. Brite is an author I've heard a lot about and I've been wanting to read his work for quite some time. I learned a few things while reading this book and one of them is that Poppy Z. Brite can write.

Trevor is a young man returning to the house where his mother and brother were killed 20 years ago. Shortly after his arrival in Missing Mile, his old hometown, he meets a young computer hacker on the run, named Zach. The two immediately feel a connection and together they go to face Trevor's childhood home. What will they find there? Is the house actually haunted? You will have to read this to find out.

While the writing quality here was good, I have to admit that I was disappointed in the story itself. This is not the author's fault, nor the narrator's,  it was my sky high expectations. I expected a scary as hell story- and while there was a little darkness,  there was way too much romance for me. I don't mind explicit sex scenes, (gay or straight),  if they are integral to the story. Now I totally get the term insta-love. These two just met, one of them a virgin, and before you know it they are going at it at a breakneck pace. And going at it again. And again. The sexy times were sexy, don't get me wrong but after a while they finally led me to ask "Can we get to the horror already?"

Eventually, we did get to the horror, but after such a long build, it failed to move me much. I'm not sure if I was just bored by that point, or if all the romance had inured me to what should have been an exciting finale.

The narration by Matt Godfrey was excellent as always, I especially loved his Jamaican accent. Yeah, mon!

As I said, I did like the writing, and in a few spots it was nearly lyrical. From what I understand this is one of Poppy Z. Brite's, (now he goes by the name Billy Martin), earlier works. While I didn't find this novel to be a true horror story, I'm told his later works definitely are and I will be tracking those down in the future, maybe even the near future.

Recommended, as long as you're not looking for a horror tale and you don't mind a lot of romance and sexy times!

*Thanks to Matt Godfrey for the audio of this book in exchange for my honest review. This is it.*