FOR WE ARE MANY (Bobiverse #2) by Dennis E. Taylor, narrated by Ray Porter 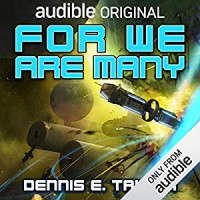 FOR WE ARE MANY (Bobiverse #2), in my opinion was even better than the first book and Ray Porter plays a large part in that.

For those who don't know, in the first book the first Bob had his head frozen and he was woken up many, many years later having had his consciousness installed in an AI. Since then, many things have happened, and Bob has created many clones of himself, as he was designed to do. His, (their), goal is to save humanity, (we are killing our planet and there are only about 15 million of us humans left), by finding or making proper environments to which we can be relocated. Which also involves providing food, finding a way for us to get to this new environment, and a way to protect us while on the way there. He, (they), also has to play referee to the factions of humanity that are left, because we never stop arguing amongst ourselves, do we?

While doing this, the Bobs, (the Rikers, Homers, Hals, Howards, Charlies and so forth), face numerous obstacles-the scariest of which is a Mandarin speaking species that the Bobs call THE OTHERS. If you are a Star Trek fan, the best way I can describe them is a combination of the Borg with Species 8472. To be blunt, they give no fucks about humanity or anything else, we are either a food or an enemy-neither of which is a good option for Bob/us.

I discovered this book blessed (?) some of the Bobs, (most especially Howard), with defined human feeling. Even though the Bobs are all clones of the original Bob and they have his memory, once they set off on their own, they develop their own personalities, and they get to name themselves. In Howard's case, that seems to include the development of feelings towards a few humans, and this portion of the story touched my heart so much, I can't even.

I have to say that the narrator here, Ray Porter, imbues the Bobs, Admiral Ackbar, Guppy, (who sounds like Sean Connery), Butterfield, and everyone with their own personalities and voices. I don't know how he does it without getting confused, but he does do it and he is SUBLIME. There's no other word I can think of to properly describe his performances in this book. In fact, I am SURE that I would not have enjoyed this volume as much as I did if I had read it instead of listening.

I am going to keep my Audible subscription even when it goes back up to full price because I have to get the next book and I need to listen to it on audio. Reading it will just not do.

Bravo to Dennis E. Taylor and to Ray Porter for bringing the Bobiverse alive- in all its snarky glory, humor, and love for humanity.

Boatman's Daughter, The by Andy Davidson