THE FUNGUS by Harry Adam Knight 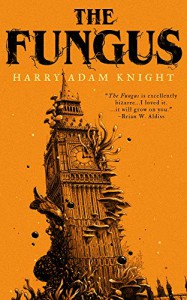 Mushrooms: I'll probably never eat one again! THE FUNGUS is a fast paced, funny and disgusting 80's horror story that contains everything you'd ever want from a fungi-based creature feature.

I recently read another book by this author, (two authors, really, using the pseudonym of Harry Adam Knight. Get it? HAK?), called SLIMER. I liked that one slightly more than this because there was no real science, just a fun, slimy, creature. In this narrative, we do have an attempt to be science-y, but not overly so, which I appreciated.

We follow several characters from the beginning, including the scientist who accidentally created this rapidly mutating fungi. Before we know what hit us, all of London is infected and not just people either. There are several types of fungi attacking concrete and other building materials eventually resulting in the literal crumbling of the city. Will any of the plucky characters survive? What about the doctor who created this mess? Will London itself make it through? You'll have to read THE FUNGUS to find out!

These two authors, John Brosnan and Leroy Kettle were actually very talented, (I say were, but one is still alive-Leroy Kettle,) and they knew how to write a creature feature without getting too bogged down in the fake science. Just enough to make it plausible to non-biologists is fine. Of course, using the old trope of science making a mistake and thereby destroying humanity is always rich with possibilities, maybe even more so these days than back in the 80's when this was written.

Being that this book was written back then, there are some sexist views, (a few racist ones too), and a few other things that don't fit in with today's culture and attitudes. There are also a few extraneous sex scenes thrown in there, because hey-in the 80's that's how the horror genre rolled. None of which bothered me much because this tale is just. that. much. fun.

Valancourt Books is dedicated to bringing back these out of print books, some of which have become nearly impossible to find. (If you are lucky enough to find one, you'd better be prepared to pay through the nose.) Over the years I've watched as they've become more and more popular and with their forthcoming PAPERBACKS FROM HELL series, I think they'll have reached the pinnacle as far as retro horror publishers are concerned. (They publish other lines as well, if you're interested, check out their website.)

THE FUNGUS isn't trying to masquerade as scientific or serious, it's just trying to provide imaginative, fast paced, creature feature fun. It has succeeded!

*Valancourt Books provided me with an e-ARC of this book in exchange for my honest feedback. This is it.*