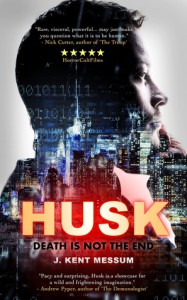 HUSK was a fast paced, science fiction, political, mysterious, horror-show and I loved it!

Let me set the scene. We're in NYC at some point in the future. The political landscape is a mess. The Occupy movement has relocated from Wall Street to Central Park and has grown beyond all expectations. Our economy has gone to hell, people are out of work and out of patience. We now grow almost all of our own food, which sounds great, but it's not. We are growing our own meats, (yes, we grow meats, UGH), and vegetables in warehouses, with who knows what chemicals and additives. There is a severe water shortage that allows us to only "mist" not shower. Our technology has outpaced us and the best of the best of it is only available to the super rich.

One of these technologies is the ability to upload your essence, (your mind, emotions, thoughts-everything that makes you YOU), into a computer or server when you die. You then become a POST MORTEM. As a PM, you can live in your own virtual reality, you can be downloaded into a robot of sorts, or if you're SUPER-SUPER rich you can hire someone to loan you their body. These hirees are called HUSKS. Rhodes, the subject of this story is one of them.

Rhodes is having some trouble husking lately. He's returning to his body to find it beaten up, scratched and bruised. Nothing that would violate his husking contract, but definitely things that devalue him to a post-mortem looking for a good time. When Rhodes starts having hallucinations and memories that are not his own, he begins thinking about leaving husking behind and finding another line of work. Will he be able to extract himself from this business? Will he be able to return to a somewhat normal life and his pregnant girlfriend? You'll have to read this to find out!

The mystery here is quite engaging, and it's hard to figure out what's going on at first, until you get the feel for how husking works. It's basically high tech prostitution. With the lack of jobs and the tanking economy, Rhodes lacks the skill set to do much else-I felt for the guy. Most people I know, including myself, are a few paychecks or one major illness away from being out on the street.

Aside from the mystery surrounding Rhodes, the politics and observations regarding our climate and environment, the rich vs. the poor, cloned foods and the lack of fresh foods are sharp, on point and all too realistic. Messum has envisioned a scary and dark world that has no time or room for the poor, the uneducated and/or the unlucky. This is where the horrific aspects come in. (Other than the horror of lending out your very body and mind, of course.)

I was impressed by this story. The world-building is not only fascinating but prescient and did I mention all too realistic? The characters were mostly well drawn, though I feel like I didn't get to know Rhodes quite as much as I wanted to. Perhaps that's because Rhodes didn't even know Rhodes? I'm not sure, but I deducted half a star for something I felt was missing in Rhodes, in his girlfriend Ryoko, and in Phineas, a friend to them both.

That said, between the vision of the world presented, the technological ideas, the fast pace and the action that occurs during the second half? I totally enjoyed this experience and I ripped through it quickly and with great pleasure!

You can get your copy here: HUSK

*I received a free e-copy of this book in exchange for my honest feedback. This is it.*