GHOST MINE by Hunter Shea 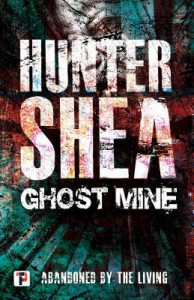 Teddy Roosevelt is now president and recruits two of his old partners from the Rough Riders and the Indian Wars to investigate a town out west. Teddy previously sent American troops to investigate the claim that there was gold in the mines there, but now the troops have also disappeared. Teddy tasks Nat Blackburn and his companion, Teta, to find out what happened. Once they arrive in the town of Hecla, Wyoming, they discover a lot more than some old abandoned mines. Will they find out what happened to the men Roosevelt sent? Will they verify that gold is "in them there hills?" Will they even survive their trek? You'll have to read this to find out!

I had a lot of fun reading this horror/western. Nat is an instantly likable guy, though rough around the edges and his companionTeta, is interesting as well.

Where I ran into a bit of trouble with this book was with the amount of things going on. We have native American legends, the Djinn, shapeshifters, preachers, and dead-speakers, not to mention Satan himself!

Not that I didn't enjoy all that, because I did, it just seemed like a bit too much-almost as if the story didn't know quite what it wanted be.

That said, I chose to suspend my disbelief and once I did, I had a great time! I was totally rooting for team Nat & Teta and just had to know what happened. From about 60% in, I could not put the book down and ended up finishing it the same day. The story steamrolled right on through to the finale and I was barely hanging on for the ride!

I would gladly read any sequel or any other book featuring the team of Nat and Teta, so please, Mr. Shea! Bring it on!

*Available May 30th, but you can pre-order here: GHOST MINE

**I received a paperback ARC from Flame Tree Press for review consideration. I considered it, said Hell Yeah! and read the book.**