THE RESURRECTIONISTS by Michael Patrick Hicks 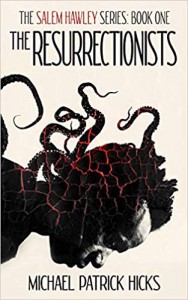 Salem Hawley is a free black man ever since helping the Colonies fight against the British. Now he is helping Americans battle against creatures of the cosmos. Doctors are trading in flesh, not only to further their science but to triumph in their nefarious efforts to bring forth these aforementioned creatures. Do any of Salem's actions make his make life as a black man at that time any easier? No, no they do not. Will he be able to help his fellow citizens fight an enemy most have never seen? If he does, will he survive the fight? You'll have to read this to find out!

There's a lot going on here for such a short novel. Clashing personalities, clashing cultures, a city in fear, cosmic frights and real life ones as well. Somehow, the personality of Hawley stands out as a shining example of good and hope, while most of the doctors come off as exactly the opposite. It amazed me how well these characters were drawn, considering how much page time they each were given.

I definitely recommend this book. I had previously sworn off books that are part of an unfinished series, however, I couldn't help but give in to this one-just look at the cover and you'll know why.

Recommended! (I can't wait for the next book!)

*Thank you to NetGalley and the publisher for the e-ARC of this book in exchange for my honest feedback. This is it.*