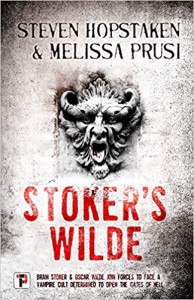 STOKER'S WILDE is an epistolary novel, blending the styles of Bram Stoker and Oscar Wilde. What a hoot!

Not since ANNO DRACULA have I had such fun with characters from history. In this tale, Bram and Oscar team up, despite hating each other's guts, to cleanse London of the scourge of vampires and werewolves currently at large about the city. With humor and great talent these authors have written quite an adventure. Will Bram and Oscar be successful? You'll have to read this to find out!

Having read only a few things from both Oscar Wilde and Bram Stoker, and knowing next to nothing about them personally, I cannot speak to the historical accuracy regarding their personal lives. The epistolary portions written by "Oscar" were often hilarious and scathing all at once. Those of "Stoker" were much more serious and weighty. The fictional origins of the THE PICTURE OF DORIAN GRAY are here and of course, Dracula.

My only issue with this book was the dragon. I thought at first it sounded a little silly, and the authors were able to make it less so, when it finally appeared. Still, it seemed a bit too over the top in the end.

Overall, this book was a blast! I had a lot of fun in London of the early 1880's, in the Lyceum Theater and even at Stonehenge. (Yes, that's here too!) It's clear that the authors did quite a bit of homework and the little bit of actual history I am familiar with is borne out here. Solely because of the fun factor alone, I heartily recommend this book-especially to fans of epistolary novels!

*Thank you to Flame Tree Press for the e-ARC of this book in exchange for my honest review. This is it!*