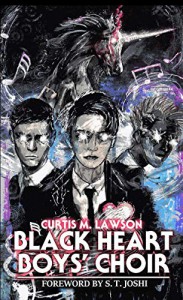 BLACK HEART BOYS' CHOIR required a bit of time on my part for everything to sink in. Once it did, I felt liking shouting BRAVO and throwing some roses at the author. A friend took me aside and told me this was frowned upon, so I decided to write this review instead.

Lucien has recently lost his father to suicide. Shortly after that, he loses his mother to grief, (among other things.) To top it all off, he and his mother are required to move from their rather posh house, to a humbler home in a condominium. He is full of anger and disgust-with himself, and his weak parents. He begins hearing music in his head, as well as voices, and shortly thereafter he discovers a piece of orchestration that his father began to write but never finished. He sets out to quiet those voices and the music-will he be triumphant? You'll have to read this to find out!

I became a fan of Curtis Lawson last year and immediately bought another of his books when I finished the first. (I haven't been able to get to it yet-story of my life.) However, when he offered me a chance to read this one early, how could I say no? At first, I was a bit confused as to what was going on, and to be honest, I wondered if this novel was going to require some kind of musical knowledge or at least the ability to read music. I needn't have feared, since all that was required was close attention on my part. That wasn't hard to give because the narrative soon swept me up and carried me to the denouement, much like a wave at the beach carries you to shore.

Why did I need time to mull over this story? I can mention some of the reasons here, some I cannot because...spoilers. Lucien was not altogether likable, even before some of the more distasteful events occurred. Luckily, I'm okay with real people being the main character-meaning in real life, people are not all good or bad, so why do some expect that in their fiction? Another reason I needed to mull for a moment is mental illness. (Lucien reminded me a lot of a young man I knew who suffered from Schizophrenia.) In the end, this tale broke another way, but somehow I came away from it with a better understanding of the young man I once knew. (Or at least, I think I did.)

As a whole, BLACK HEART BOYS' CHOIR tackles a lot in its few pages: suicide, death, abuse, neglect, teen friendships, (and many of us know the friendships made during that difficult time in life are hard to break), resentments, music, mental illness (?), demons...well, you get the picture.

Hopefully, you now understand my reasons for mulling over this tale. I believe I will be thinking about it for quite some time. These are generally the types of stories that stick with me-the mull-ers. If what I've described above sounds good to you and if you enjoy thinking about a story long after it's finished, then I highly recommend BLACK HEART BOYS' CHOIR!

*Thank you to the author for the e-ARC of this novel in exchange for my honest feedback. This is it.*