I have a thing for Irish writers. I'm not talking about the old poetry writing ones like Yeats, I'm talking about modern day writers, like Dennis Lehane. (Or Kealan Patrick Burke or John Connolly!)  But, back to Mr. Lehane.

Have you ever read a book that , thereafter, caused you to become excited each and every time someone mentioned that book or that author? That happened to me since I read Mystic River. My God, what a dramatic book and what a dramatic ending! I can still feel my heart breaking as I realized what had actually happened. That's right, I feel it to this day. Not very many authors are capable of doing that. Mr. Lehane is.

I felt somewhat the same way about Shutter Island. It was an ending that I should have seen coming, but somehow, I didn't.

After reading Mystic River, I began to track down the Gennaro/Kenzie series. This is the series which begins with A Drink Before the War. At the time I began the series, I thought ADBtW was an excellent read. By the time I caught up with all the other books, I realized that ADBtW was probably the weakest book in the series.

I bought The Given Day  when it was the Kindle Daily Deal and it was a very different Lehane experience. I LOVED it! Historical fiction, mostly set in the city of Boston,  (capital of my home state), this book highlighted life in the city at the end of the first World War. Mr. Lehane brought the city and its inhabitants alive to my mind and in addition to this being an excellent story it was also extremely informative.

Live by Night  is also partly an historical fiction novel which starts off in Boston but then follows  Joe Coughlin to Tampa and to Cuba to watch him build his bootlegging empire. What makes this a little different is that Joe is the son of a cop during a time in Boston when the cops are on strike. Can a man be a criminal and at the same time be a good man? This book addresses that question and more. 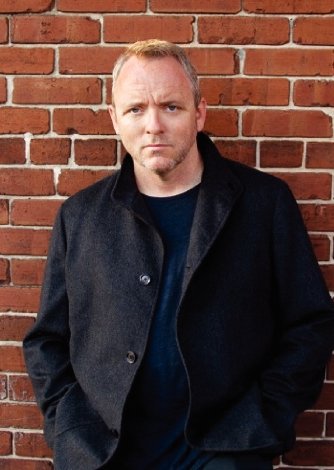 I guess I'm trying to say that I love Dennis Lehane! I love his versatility and his skills as an author.   He is able to make me both love and hate a character at the same time. He is able to enlighten me to a city's history while at the same time entertaining me with a damn good yarn. He also loves libraries and he loves the city of his birth. He wrote this powerful piece after the Boston Marathon bombing and that made me love him even more: Boston Globe Piece.

Anyway, I humbly hope that perhaps I have turned one person on to the literary delight that is Dennis Lehane. At the worst, I have provided a nice picture of the man for you to look at.