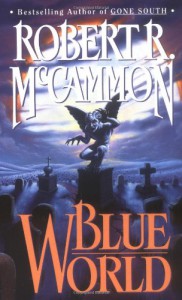 I started off making notes on each story that I thought was above average, as you can see below...

The first story in this collection, "Yellow Jacket Summer" knocked my socks off. It was eerily reminiscent of an episode of The Twilight Zone. The bees! 5*  Edited: It turns out that this actually WAS a Twilight Zone magazine story in 1986.

The second story, "Makeup" was a tribute to horror films of old, with all kinds of references to a previous Robert McCammon novel, They Thirst. 4*

"Nightcrawlers"-a heavy story about a Nam vet dosed with a chemical named Howdy Doody. 4*  Edited: This was adapted for the small screen by the new Twilight Zone show. You can watch the episode online at You Tube for free here:

Edited to add a few words about the story "Yellachile's Cage".  This story is good enough to get its very own mention here. A prison story, slightly reminiscent of The Shawshank Redemption, with its message of hope.

Edited to add a few words about the story "Pin".  Apparently, Pin was made into a short film by a student named Christian Frahme. This story was so disturbing I could not bring myself to watch the film. In case you would like to after you read "Pin", here is a link to the film: http://vimeo.com/19771743

"Night Calls the Green Falcon" had me in tears as did the last novella Blue World.

...then I realized that every story is above average in this collection. Well, all but one of these tales strongly resonated with me.

Robert McCammon will forever be one of my favorite authors. No matter the subject, the strength of his writing never fails to show through.